Hours are 10 am to 5 pm. Monday through Saturday

“Since the 10th anniversary of the 9/11 attacks, New York City has undergone an amazing construction boom transforming an iconic skyline known to people the world over into a completely new look. The city has added supertall skyscrapers to Lower Manhattan, to the west side of midtown with Hudson Yards, and to 57th Street with the addition of the pencil towers along the new Billionaires’ Row. I have spent the last 10 years documenting this change, trying to incorporate the old with the new as the old gets harder and harder to see. With the help of the sun and moon, I try to show the endless beauty of the worlds most desired destination and capture renowned structures like the Statue of Liberty and Empire State Building,” says Gary Hershorn. 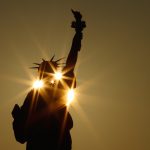 JERSEY CITY, NJ – NOVEMBER 20: The sun rises behind the Statue of Liberty in New York City on November 20, 2021, as seen from Jersey City, New Jersey. (Photo by Gary Hershorn/Getty Images) 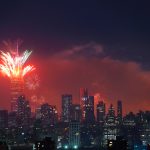 UNION CITY, NJ – JULY 4: Fireworks explode over the skyline of New York City and from the Empire State Building during the Macy’s Fireworks display on July 4, 2021 as seen from Union City, New Jersey. (Photo by Gary Hershorn/Getty Images)

New York City’s system of parks, occupying nearly 30,000 acres of land, numbering more than 1,700 parks and playgrounds, and serving more than 8 million people is one of the most complex, diverse and extraordinary in the world. “Delicately interwoven into the fabric of the city, natural spaces and city parks are inextricably tied to the health of an extremely diverse series of communities and constituencies across the five boroughs,” says Adam Stoltman, who will preview select images from his 6-year ongoing project documenting the many ways in which New Yorkers interact with, utilize and enjoy these parks each day.

A photographer and editor for more than 30 years, work by Adam Stoltman has appeared in Newsweek, LIFE, Sports Illustrated, The New York Times Sunday Magazine, New York, Stern, Paris Match, and numerous other publications. He has covered 12 Olympic Games, and most major sporting events, some as a photographer and others as an editor. Parks and People is a photographic exploration of New Yorker’s relationship with their parks, green spaces and playgrounds. With 1,700 parks covering more than 30,000 acres, it is as much a social ecosystem as a natural one. 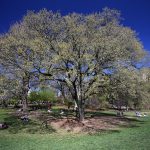 Central Park, Manhattan Naearly 18,000 trees stand in Central Park, and no two are exactly alike. This giant oak on the park’s east side just north of the Metropolitan Museum of Art is a popular lounging spot in spring and summer. 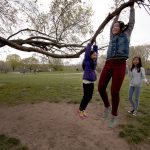 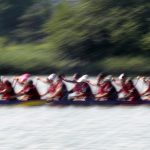 The Hong Kong Dragon Boat Festival in Flushing Meadow Corona Park, Queens, is the largest and oldest Dragon Boat event in the United States. More than 200 teams and 2,500 competitors took part in last summer’s event which was the 29th annual.

Both Gary Hershorn and Adam Stoltman will speak at 5 pm on Monday, December 13, followed by the free opening reception from 6:30 to 8 pm.

About the Palm Beach Photographic Centre:

The Photo Centre is located at the downtown City Center municipal complex at 415 Clematis Street in downtown West Palm Beach. Hours are 10 am to 5 pm. Monday through Saturday. For more information, please call 561.253.2600 or visit www.workshop.org or www.fotofusion.org.

The Palm Beach Photographic Centre is a non-profit organization dedicated to enriching life through the photographic arts. All donations are greatly appreciated at www.workshop.org/contrib.